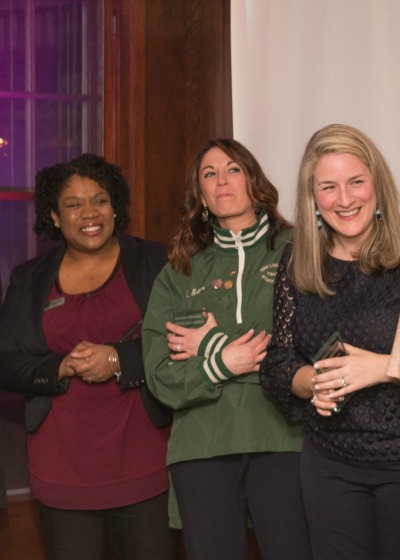 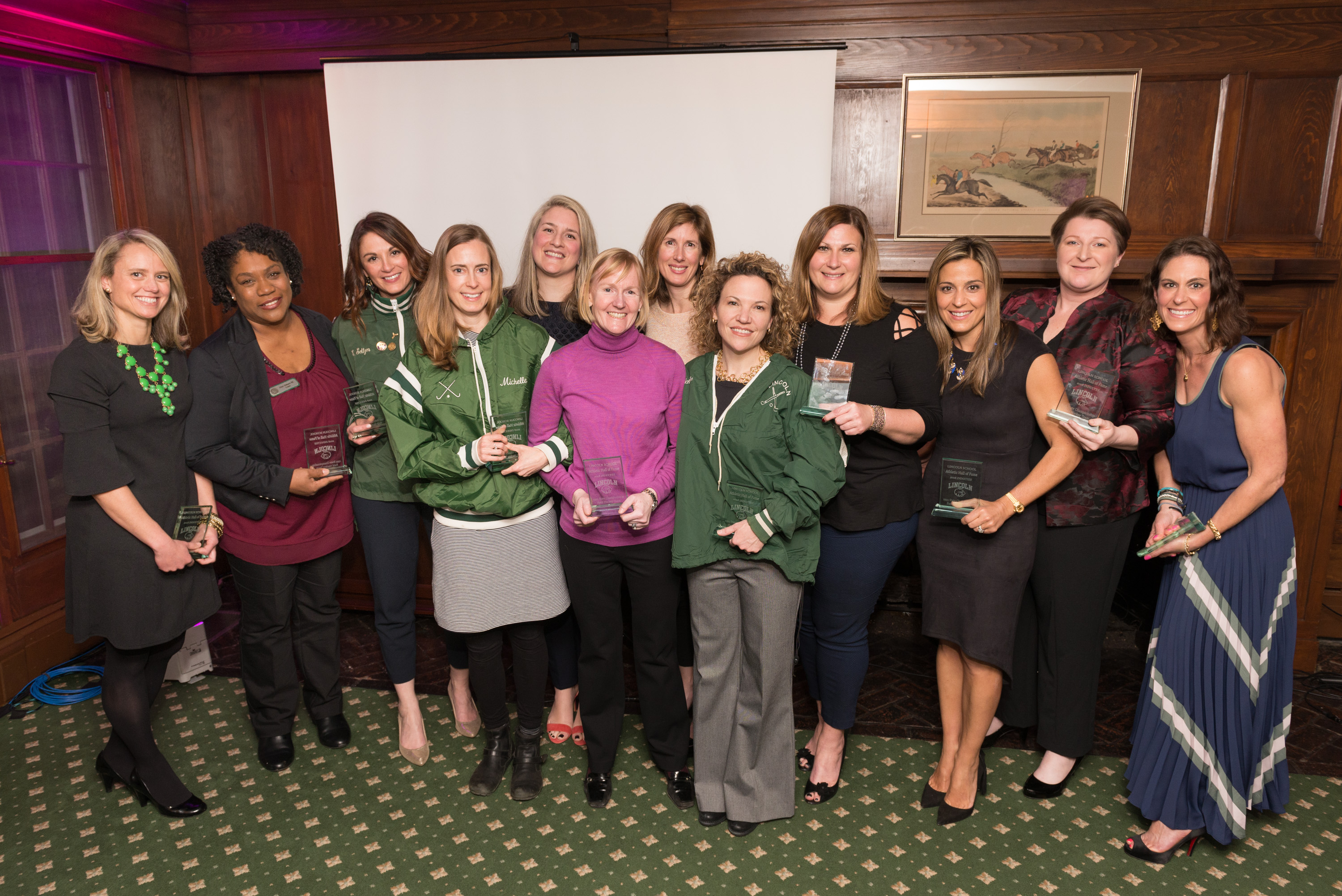 A new class of athletes and athletic supporters were inducted into the second-ever Lincoln School Athletic Hall of Fame this past weekend. The evening, filled with spirit, school pride, and scores of  #likeagirl champions, proved that once a Lynx, always a Lynx!

Congratulations to new members of the Athletic Hall of Fame!

Dale Philippi Walker, a member of the Class of 1964, was a five-sport athlete while at Lincoln, competing in tennis, basketball, softball, field hockey, and on the school’s first-ever lacrosse team. A leader on and off the field, she captained the tennis, field hockey, and lacrosse teams, and served as the president of the Lincoln Athletic Association during her senior year.

Callie Knowles Clapp, a member of the Class of 1985, was a three-sport varsity athlete during her time at Lincoln, competing in field hockey, basketball, and lacrosse. She captained each of the three sports she participated in. Her classmates remember her for her ability to feel fear and move past it with grace, even in the face of the cancer that took her life. She is admired, loved, and missed by many.

Ashley Bowen Swenson, a member of the Class of 1990 and the oldest of the three Bowen sisters, competed in field hockey, squash, and lacrosse while at Lincoln. She played both field hockey and lacrosse for six years, beginning in Middle School, and captained both teams during her senior season.

Hathaway “Happy” Bowen Farrow, a member of the Class of 1993, was a three-sport athlete during her years at Lincoln, competing in field hockey, squash, and lacrosse like her sister, Ashley. She began the field sports in Grade 8, and then competed for four seasons in field hockey, squash, and lacrosse in Upper School, serving as the captain for each during her senior year.

Lindsay Bowen Coe, a member of the Class of 1996 and the youngest of the three Bowen girls, excelled on the field and in the pool during her time at Lincoln, competing on the field hockey, swimming, and lacrosse teams in both Middle School and Upper School. A six-year participant in each of the three sports, she captained the field hockey team as a senior, and the swim team as both a junior and senior.

Hillary London, a member of the Class of 1996 was a four-sport athlete during her time at Lincoln, competing on the field hockey, basketball, squash, and lacrosse teams. She played both field hockey and lacrosse for all four years of Upper School, earning a varsity letter each season as the goalie.

Megan Long Gerardi, a member of the Class of 2001, was a four-sport athlete while at Lincoln, competing in field hockey in the fall, both ice hockey and squash in the winter, and lacrosse in the spring. She captained both the field hockey and ice hockey teams as a senior.

On Thursday, November 11, 1993, Lincoln School’s varsity field hockey team won the school’s first Rhode Island Interscholastic League State Championship title with a victory over North Kingstown in a game played at Providence College. The team also won the RIIL Northern Division Championship title, finishing its season with a 14–2–2 record league play and a 17–2–2 record at the conclusion of the tournament.

Ronnie McFarland joined the Lincoln School community in 1995 as a physical education teacher, field hockey coach, and lacrosse coach. In 2001, she was promoted to Director of Athletics, and she retired in June 2014, after 13 years in the role. Under her leadership, Lincoln School athletic teams won 22 championships, and many athletes went on to play their chosen sports in collegiate programs and international levels, and several continue to be involved as coaches on both the high school and college level.

The three Bowen girls—Ashley, Happy, and Lindsay—were incredibly successful student-athletes while at Lincoln, and they were supported by their mother, Sharleen, a tireless supporter during her girls’ playing days.

While her daughters were competing at Lincoln, Sharleen helped found a booster club for both the field hockey and lacrosse teams, hosting post-game get togethers at Faxon Farm with opposing teams. She also traveled to Scotland with the field hockey team in 1995, supporting the the team as they played in Glasgow and its surrounding communities.

Suzanne Young Murray ’58 and Terry Murray, their three daughters—Colleen Murray Coggins ’79, Paula Murray McNamara ’80, and Megan Murray Craigen ’93—and the rest of their family, including current Trustee Tim Coggins and their granddaughters, Maggie McNamara ’13 and Catherine Coggins ’16, have made, and continue to make, a lasting mark on Lincoln School. Guided by their deep love and devotion to Lincoln, they are faithful and generous supporters, volunteers, leaders, and advocates for Lincoln’s mission.

“We deeply believe in Lincoln School’s mission, one that educates young women to succeed in and change the world,” said Paula, president of the Murray Family Charitable Foundation and former chair of Lincoln School’s Board of Trustees.

The alumnae in the family have contributed impressively on the playing field, but perhaps the Murray’s most significant impact has been made in the creation of the athletic complex where our athletes have experienced success. Thanks to their generosity and vision, Lincoln's 33-acre athletic complex, The Murray Athletic Complex at Faxon Farm, is located in Rehoboth, Massachusetts, a 15-minute drive from the Providence campus. The complex has the only synthetic turf field lined only for girls sports in SE New England, two natural turf fields, also lined only for girls, and six all-weather tennis courts. Their generosity to Lincoln has been transformative, supporting initiatives that will benefit generations of Lincoln’s student-athletes.