Subscribe to Alerts
Bridging the Gap: Two Class of 2018 Graduates Make Their Mark 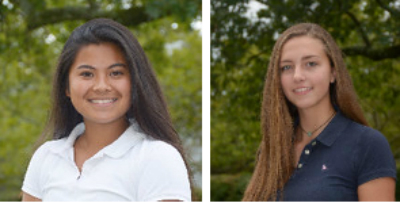 At Lincoln School, we believe in bold minds that forge their own paths. Two such minds are members of the Class of 2018, Portia Gaitskell and Lynn Villarica, who have big plans to thrive at prestigious schools after Lincoln, but not before taking some time to make their mark on far corners of the world.

Gaitskell, who plans to major in mechanical engineering while competing on the crew team at the Massachusetts Institute of Technology, and Villarica, who plans to pursue a combination of Russian, political science, and classics at Barnard College, are both electing to take a gap year across the globe before signing up for life as undergraduates.

Villarica will study Russian for a full year in Moldova as the recipient of a fully funded Department of State scholarship, the National Security Language Initiative for Youth (NSLI-Y), a competitive program dedicated to preparing American citizens to be leaders in the global world. Gaitskell will move to Sydney, Australia to row with the University of Sydney boat club and get a taste of life down under.

“I’m really lucky that MIT is a school that encourages gap years, and that I have parents who bolster that encouragement,” said Gaitskell. “I want to make sure college is about college, so why not get out there to explore a completely different environment, a completely different cadence of living, so I can make sure to be as focused as I can once I get onto campus.”

For Villarica, her gap year will feel perhaps a bit more familiar, not because the rural Eastern European country necessarily has much in common with her life in Rhode Island, but because she already has an 8-week language immersion experience under her belt.

“I was in Russia the summer before junior year, and even though I didn’t know anything about the language, it was such a fun experience. It was true immersion—no one spoke English. It was real Russia,” said Villarica. “Everyone there was picked from all across the United States, and was so exceptionally smart. And it was there that I realized how much my Lincoln education was, and will continue to be, a huge asset.”

“It’s always been math and science for me, and I got into those in depth at Lincoln. Those experiences made me realize that I want to be an engineer,” said Gaitskell “With mechanical engineering, which is a field of engineering I’m passionate about, I can apply math and science to make products that are useful to the world.”

Villarica’s experience next year has a similar goal—to be of use to the world at large.

“The whole point of NSLI-Y is to facilitate ways for our countries to talk to one another,” said Villarica. “I can’t wait to really learn this language and this culture. I really believe that being a global citizen is critical today. We need that kind of understanding now more than ever.”